Tumi is another horse that originated from Gary Alexander Racing Stables. He was a very tall bay colt, approximately 16.3hh, but a very gentle boy. He is bred by Bosworth Farm. His sire is Hobnob (GB) and his dam is Chan-Chan (by Take Your Place USA). He was born in 1993. His career earnings as a racehorse were R33 200.

He had his first start for the stable in September 1996, where he finished 2nd. Unfortunately he injured his off fore superficial flexor tendon. He has given a lengthy rest and intensive rehabilitation, and returned to be sound enough to race again. he had 5 more starts, from May 1998, and won his second last start for the Alexander Stable in June 1998. He has one more start for us after that. After only having 5 starts and only one win in just over 3 years in training, his owner decided that he needed to cut his losses and sell Tumi. At that stage he was still an entire (ungelded).

He left our yard in early 1999, when he was put onto a Horses-In-Training Sale,  and he was purchased by the late Koos Rossouw. He had only one start with Mr Rossouw, on 18th April 2000, and then was retired. I have tried to trace his whereabouts for the next 18 months, but I haven't been able to find any information.

The story is picked up two years later by his current owner, Candice Levy:

"In 2002 I saw this beautiful, Dark Bay gelding come off the truck from an Auction when I was just 16 years old. I just knew I had to have him. After watching 2 Instructors try and mount this extremely independent, strong-willed and feisty gelding, the urge to own him strengthened more and more.


After being told that I was not allowed to ride him because he is 17hh , too strong and wild for me, I just knew I had to!!!


My parents couldn’t afford to buy him for me, so I scraped together my small savings that I had and offered it to my instructor. After Lengthy meetings between my parents and instructor, He was finally MINE!!!


My first show on him, I placed 1st and 2nd,  I got called into the judges box and was told to sell him as he is “TOO BIG, TOO STRONG AND TOO WILD” for me, I had to prove them wrong.


We competed for the whole of 2003 and in 2004 we were selected to compete against some of the finest show jumping athletes in South Africa at the Amateur Championships at Burlington Stables, We Won!!!


By Mid 2006 we were competing in 1.25m and about to go to 1.30m when Tumi got struck by a Rhinkhals in his stable. His leg swelled to the size of a tree trunk and was put off work for a year. In fact we were told we would never jump again.


As per usual, we proved everyone wrong and we were back in the show ring by Mid 2007, trained by some of the top riders such as Barry Taylor and riding for the Farnham Team.


Although we had to start from 1m, we still managed to get our rosettes and trophy’s.


In 2008 we won the 1.10m FEI show and placed in all the smaller shows throughout the year.


In 2009 we didn’t compete in any major shows and stayed in 1.10m as I was worried about his leg but we managed to still place between 1st and 4th in every single show we did.


In 2010 we won both 1.20m classes at Burlington stables, won both classes at Pre Derby KEP and placed 2nd and 3rd at the Annual Ascot Grand Prix.


In 2011 we took a break from the show ring due to financial constraints and in 2012 we competed in our last show together at Maple Ridge in 1.10m , placing 2nd and 3rd


In 2012 Tumi stopped at his first jump at home, a day before our show, from then I realized that he was just too tired and not getting any younger. After getting vets out and doing thorough checks, we couldn’t find anything.


In 2013 I retired my handsome man at my best friends’ yard in Kya Sands where he now lives the life of luxury with another old man named Swinging Pound."

Unfortunately I am battling to source a photo of Tumi while he was still in training, but Candice has shared a few of him in his heyday as a competitive show jumper: 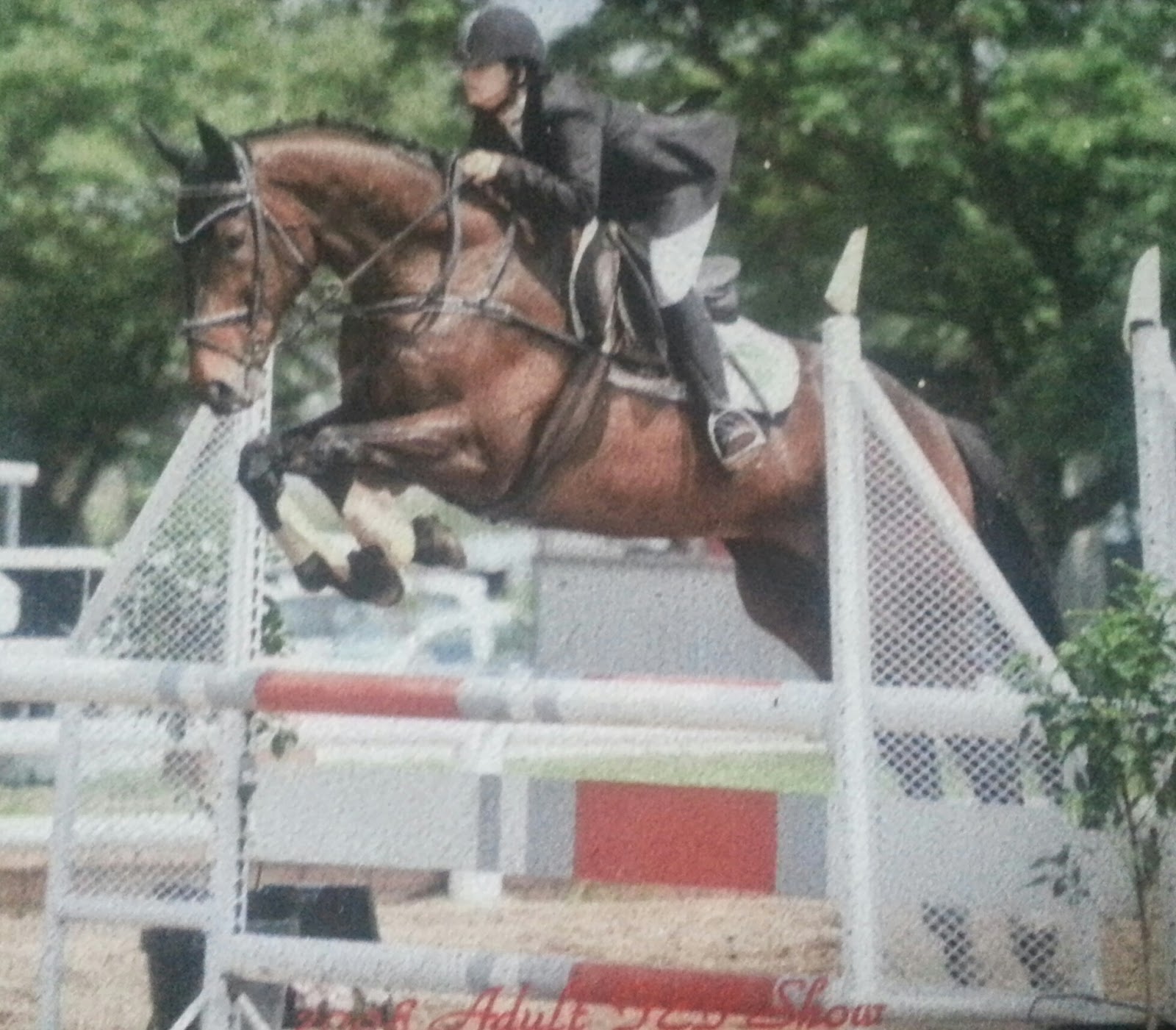 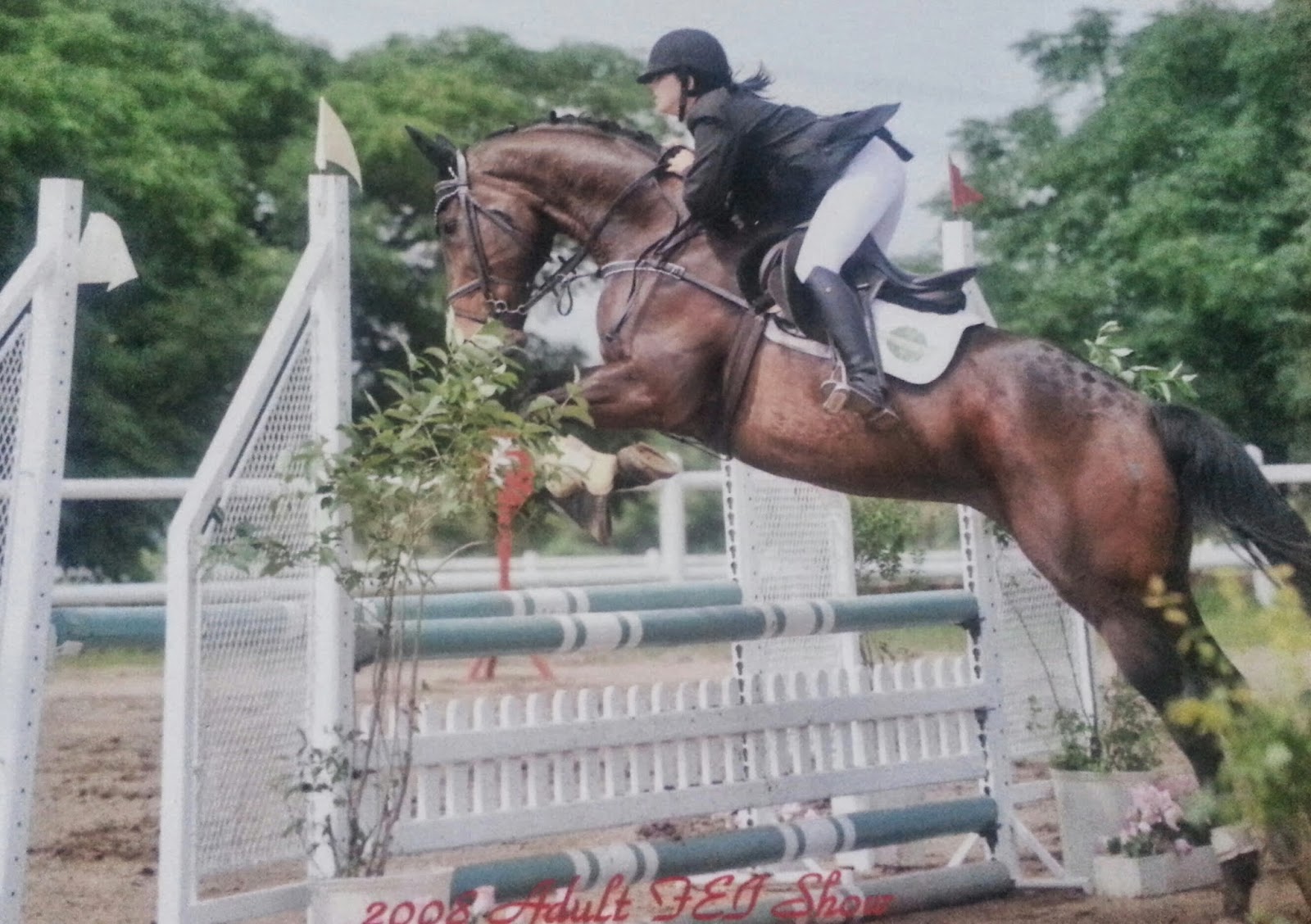 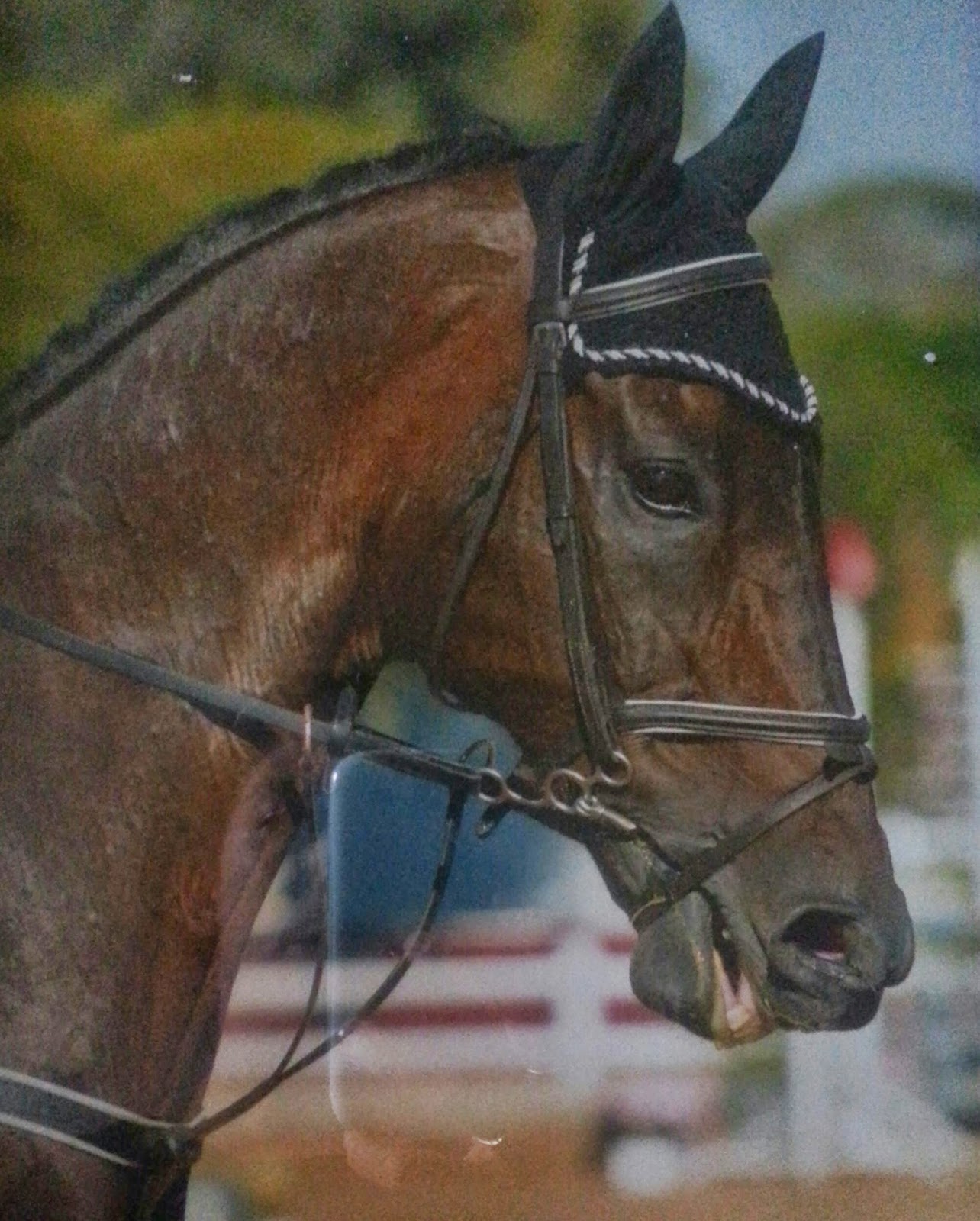 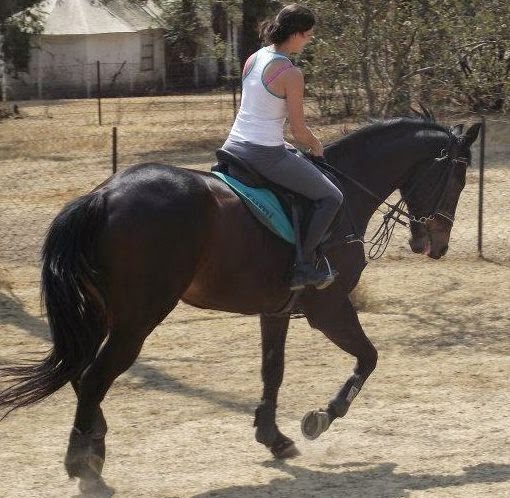 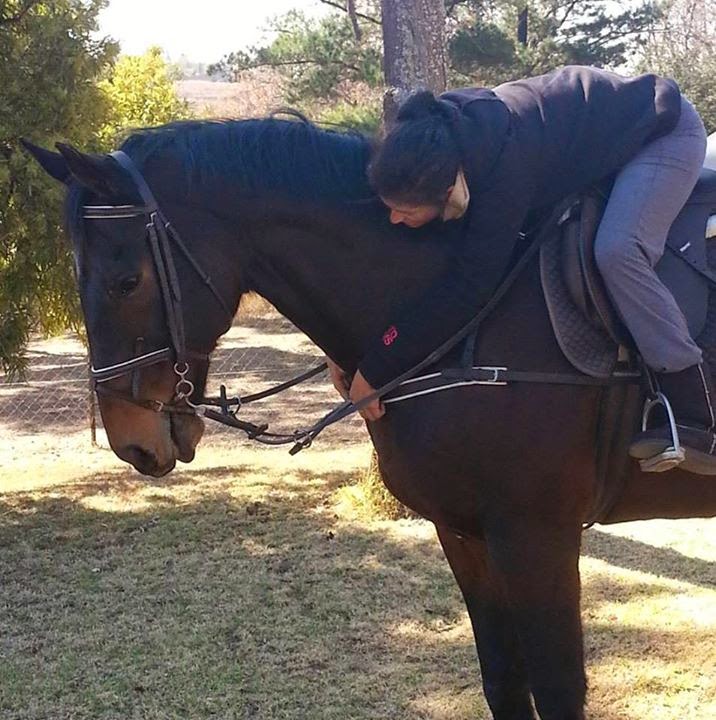 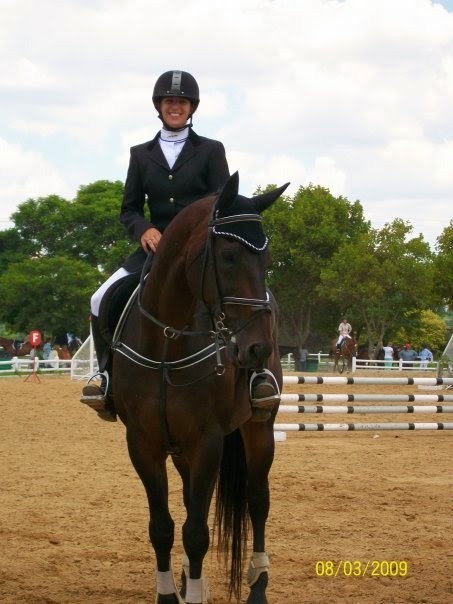 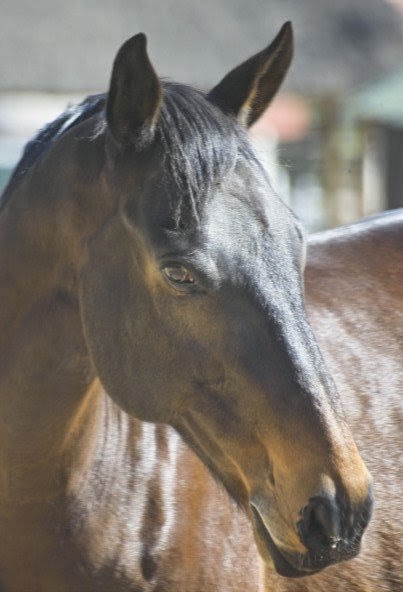 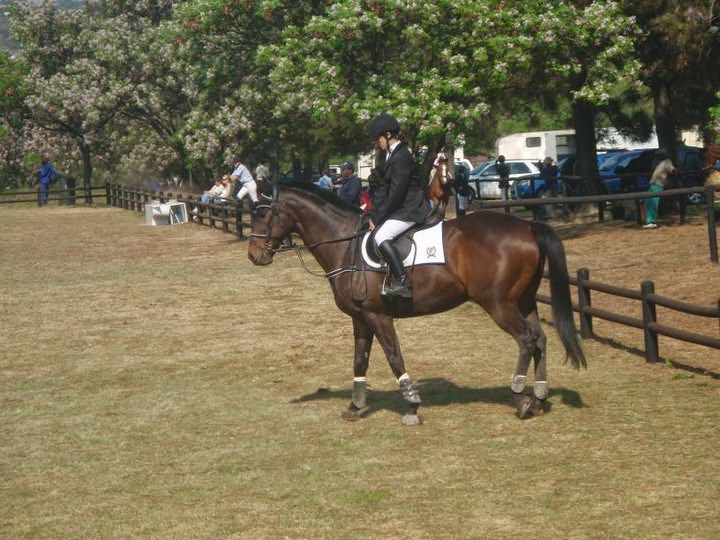 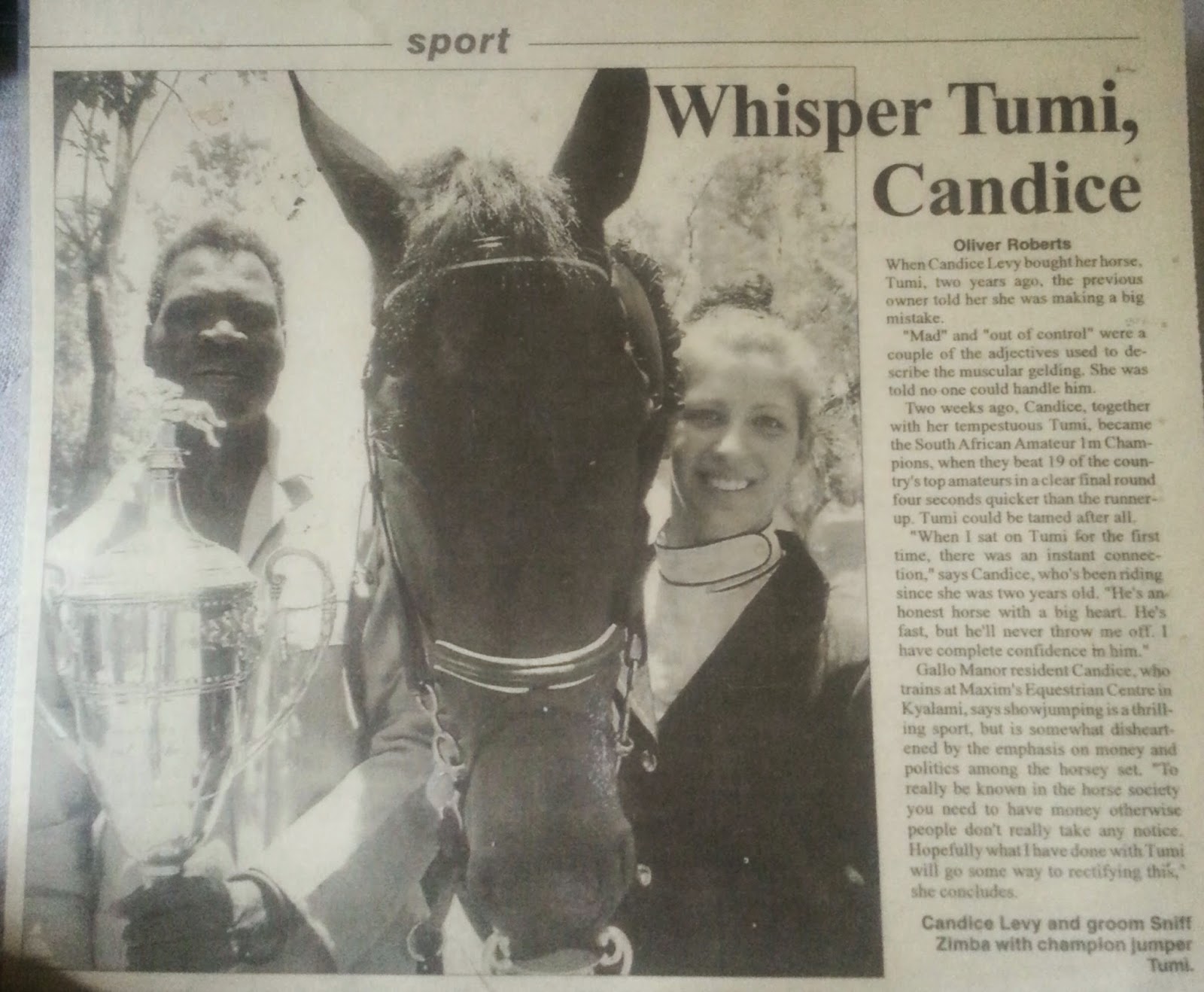 Posted by rubyclipper at 4:49 AM No comments: