Woodborough was born in the USA in 1993. He was by the very popular sire Woodman (by Mr Prospector), who has also sired some big name stallions like Timber Country, Hector Protector and the currently popular Hawkwing. Woodborough's dam, Performing Arts, was by The Minstrel, which is definitely where Woodborough got his very striking white markings! 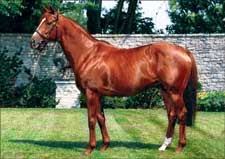 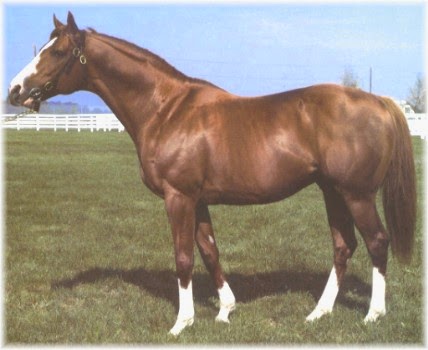 Epsom Derby winner The Minstrel (by Northern Dancer)
﻿
﻿
﻿
﻿
﻿
Woodborough raced in England, Ireland and France, and was somewhat of a sprint specialist, racing at his best over 1200m. his race record was as follows:
At 2 and 3 years old:
WON: Curragh Anglesey S., Gr.3 1250m (beating Lidanna and Harghar)
Goodwood Selsey 2YO Maiden Stakes 1200m
2nd: Leopardstown Phoenix S., Gr.1 1200m (to Danehill Dancer and beating Catch A Glimpse
Newmarket Middle Park S., Gr.1 1200m (to Royal Applause and beating Kahir Almaydan)
3rd: Longchamp Prix de la Salamandre,
Gr.1 (1400m to Lord of Men and With Fascination)
Annual Timeform Rating: 110 (at 2), 112 (at 3)
He was the Joint highest rated 2yo in Ireland in 1995.
He retired to stud in New Zealand in 1997, where he was Champion First Season Sire for 2001/2002. He sired the Stakes winners: Shinnecock, Ultra Vires, Bank Note, Egyptian Ra and Country Class.
In 1998, he stood in the Northern Hemisphere in Ireland, where he was Leading 1st and Leading 2nd Crop Sire in UK (2001/2002). He produced the Stakes performers: Flip Flop And Fly, Bella Tutrice, Caroubier and Yomalo
He came to stud in South Africa in 2003, where he stood at Rathmor Stud. Here he produced a number of Stakes winners and placed horses, Including Thandolwami, Execute, Wood Be Magic, Be Assured, Aim High, and Diego. 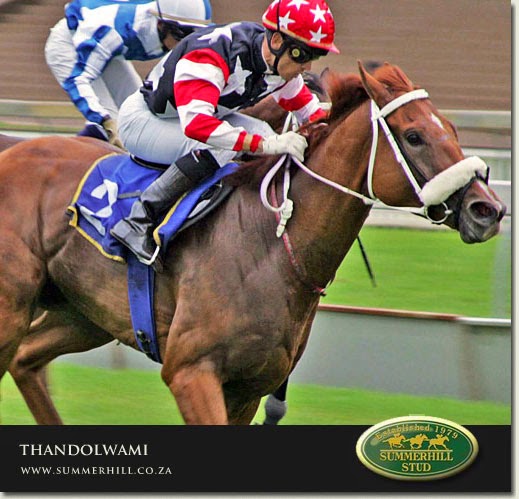 (Photo from http://blog.summerhill.co.za/blog/ )
﻿
"On 24 March 2013, the unthinkable happened, and Rathmor lost their enigmatic stallion, Woodborough. Stud owner Mike McHardy said, 'It was a very sad loss for Rathmor, describing Woodborough as being “very special.” Woodborough was the first stallion to stand at Rathmor Stud.


An eye-catching chestnut stallion - very typical of a sprinter - strong hindquarters and a lovely topline, he had a big honest eye with a striking blaze running down his face, and a very kind and gentle disposition – yet he carried that ‘presence’ that many champion Thoroughbreds do – that special something that sets them apart from the rest.


Woodborough would always emerge through the fir trees surrounding his paddock that divided his and that of Strategic News, walking over very eagerly to approach any visitors who passed by his fence for attention and a rub - he was impossible to resist.'" - Source KZN Breeders website (Candiese Marnewick)
Woodborough was the only son of Woodman to stand at stud in South Africa. 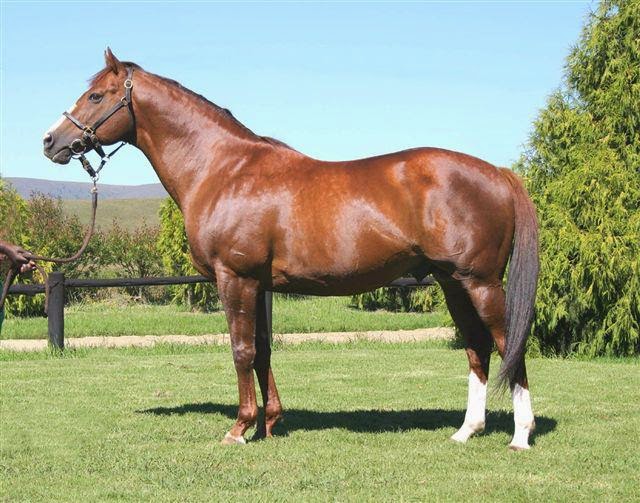 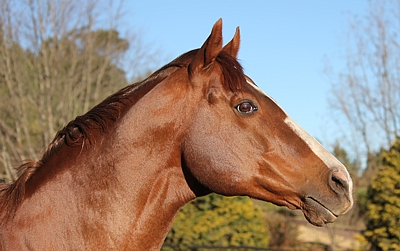 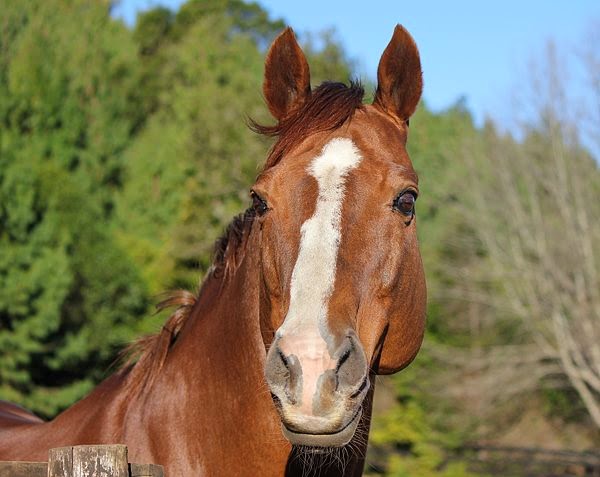 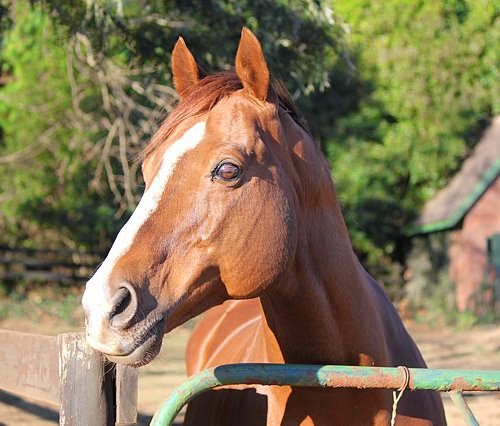 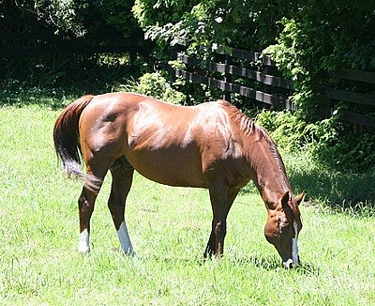 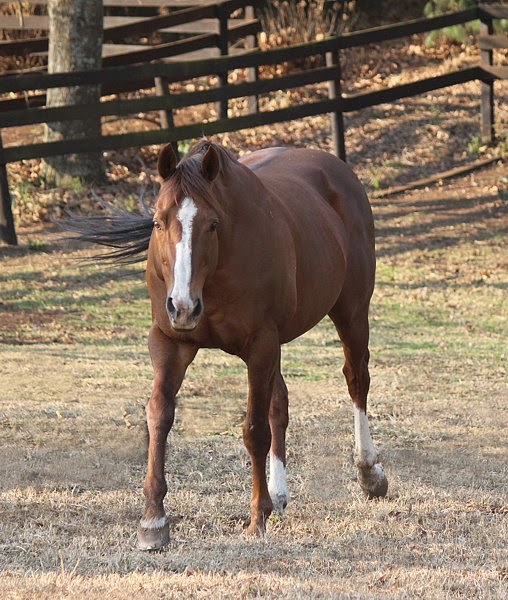 Photo Courtesy of Candiese Marnewick
In recent years, Woodborough has enjoyed success outside of the racing industry. An OTTB called Under The Clocks (NZ) ridden by Australian Murray Lamperd, has been making waves on the international eventing circuit. He has competed at all the big events like Badmington, and more recently at the 2014 Land Rover Burghley Horse Trials, where he finished 10th overall, and nabbed the Best Placed First Timer award for his efforts!
Here is Under The Clocks (NZ) pictured at the 2013 Mitsubishi Badminton Horse Trials: 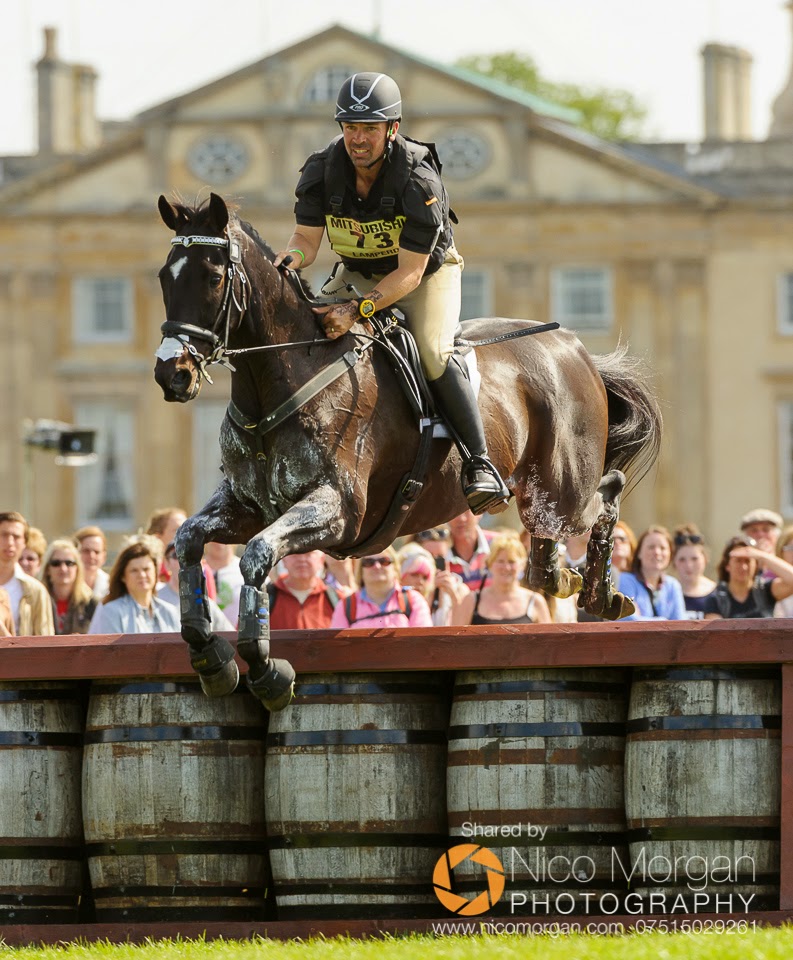 ﻿
This photo is used with kind permission from Nico Morgan Photography

http://www.nicomorgan.com/
In South Africa Woodborough has enjoyed quite a bit of popularity with the OTTB riders and fans.
Leading racing journalist Robyn Louw has a striking daughter of Woodborough called Infamy (born 2006), who is now known as In Ferno, or more affectionately, "Iffy". She is out of Lady Warden, who is by Chief Warden. Infamy ran a few places when she raced, but never broke her maiden. Robyn now has her back at home as a riding horse, where she is bring her on slowly: 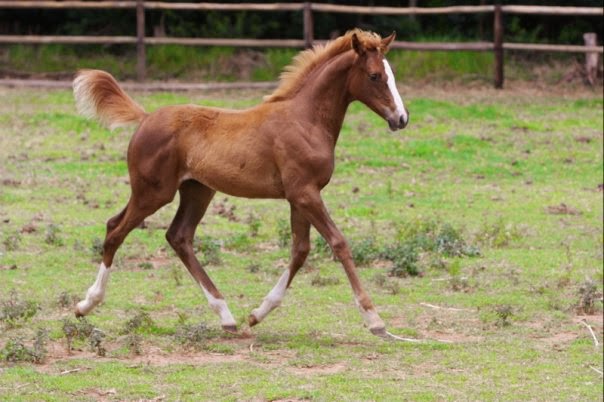 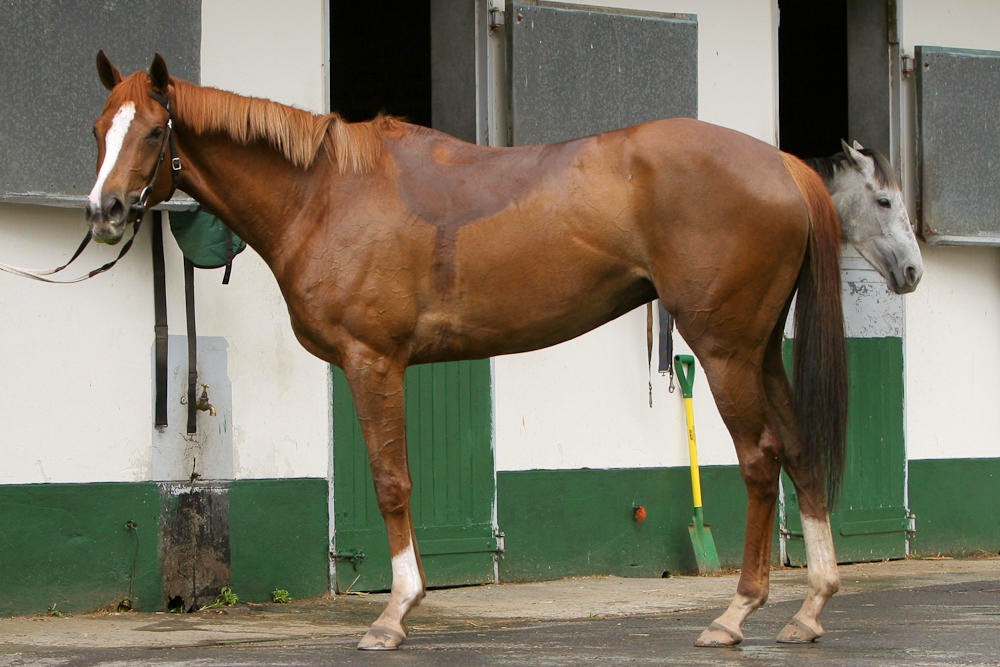 Infamy in training at the racing yard 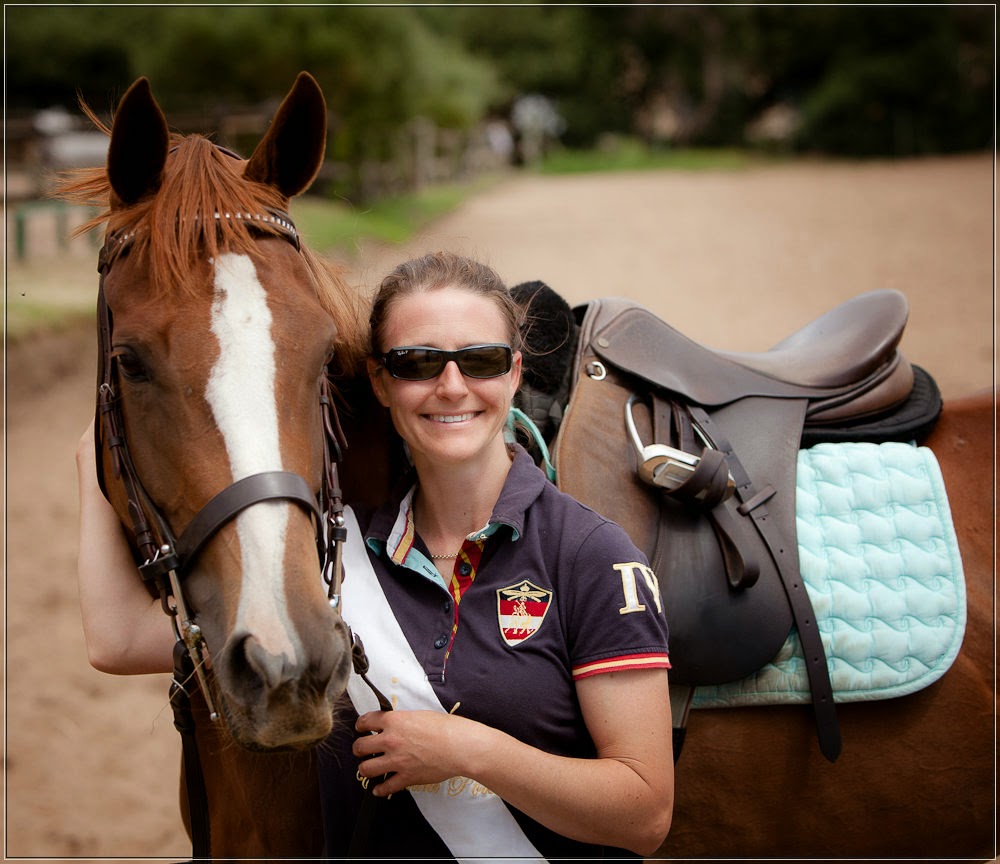 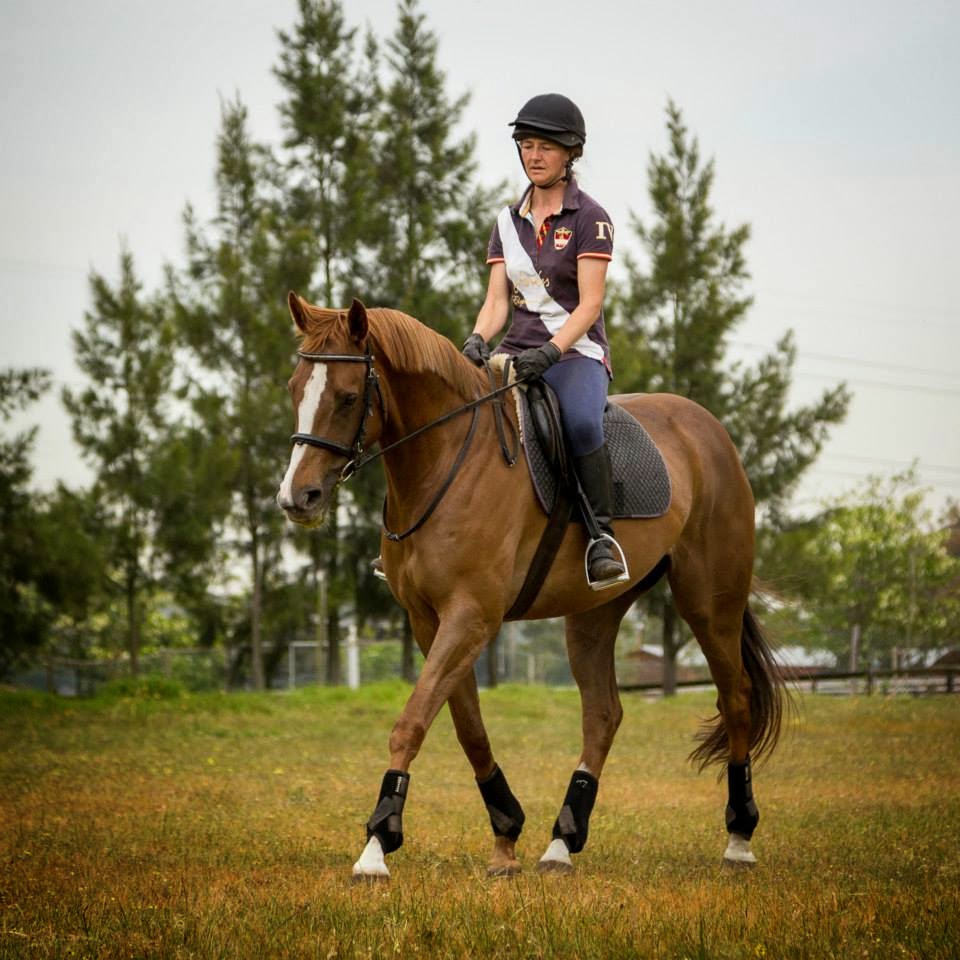 Iffy under saddle
Best selling South African author, Jassy Mackenzie﻿, also owns an OTTB by Woodborough, called Msasa Magic (born 2006, out of Northern Safari, by Northern Guest). Msasa Magic raced in Kimberley, but never won any races.
Jassy does showing, dressage and show jumping on this versatile gelding, who does all this barefoot. Another chestnut with striking white markings, Msasa has done well in the showing ring, winning his most recent classes. 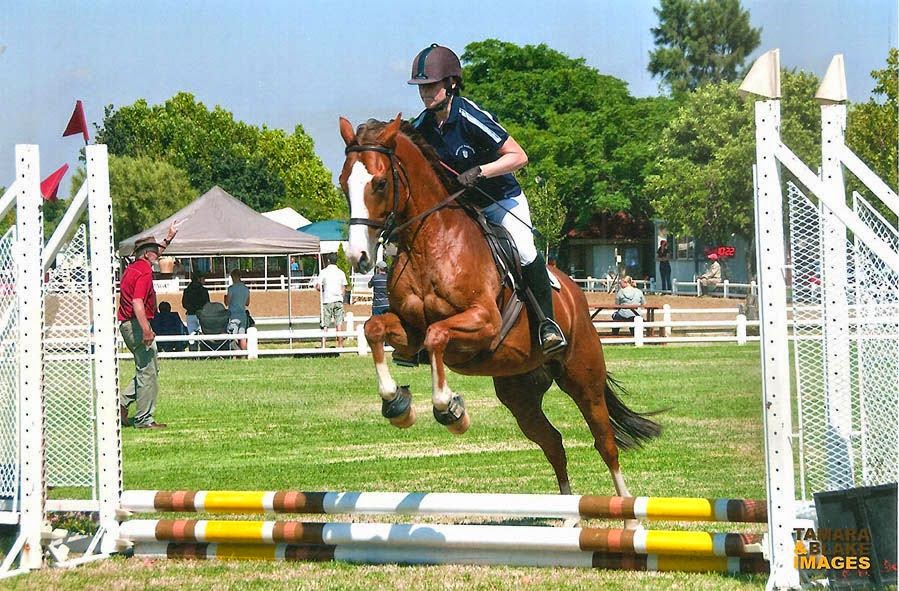 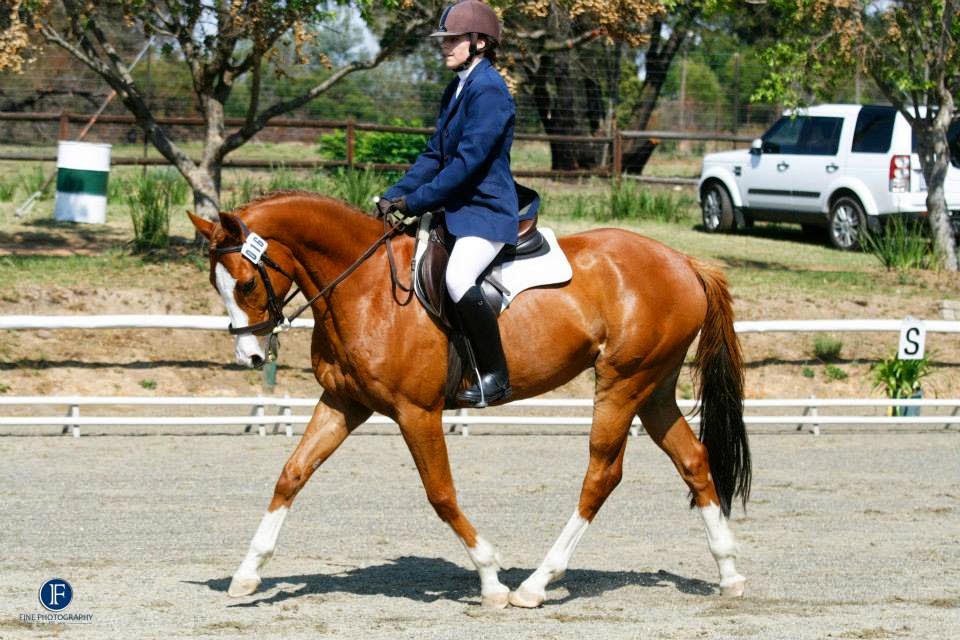 Msasa in the Dressage Arena 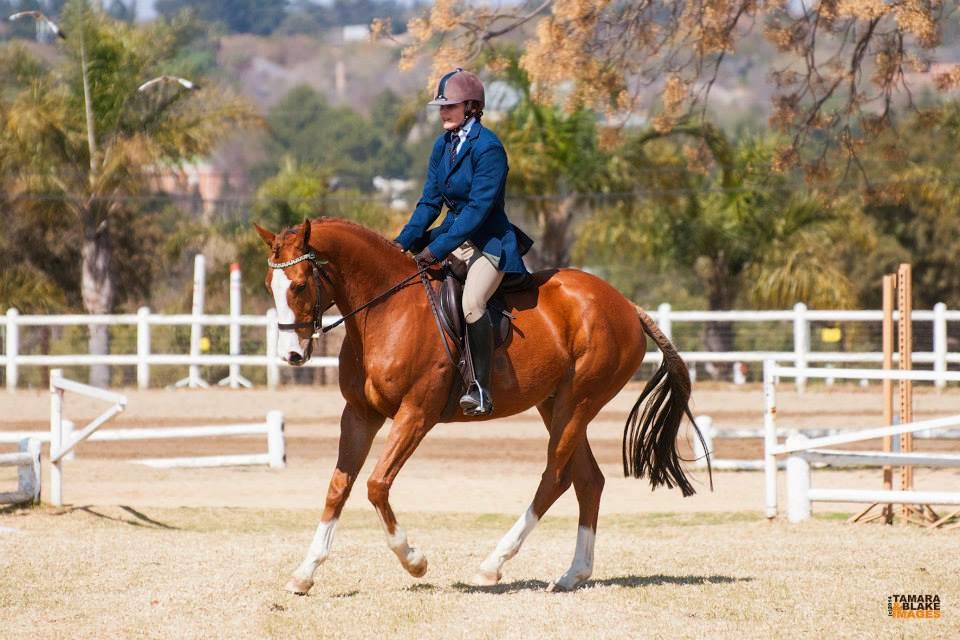 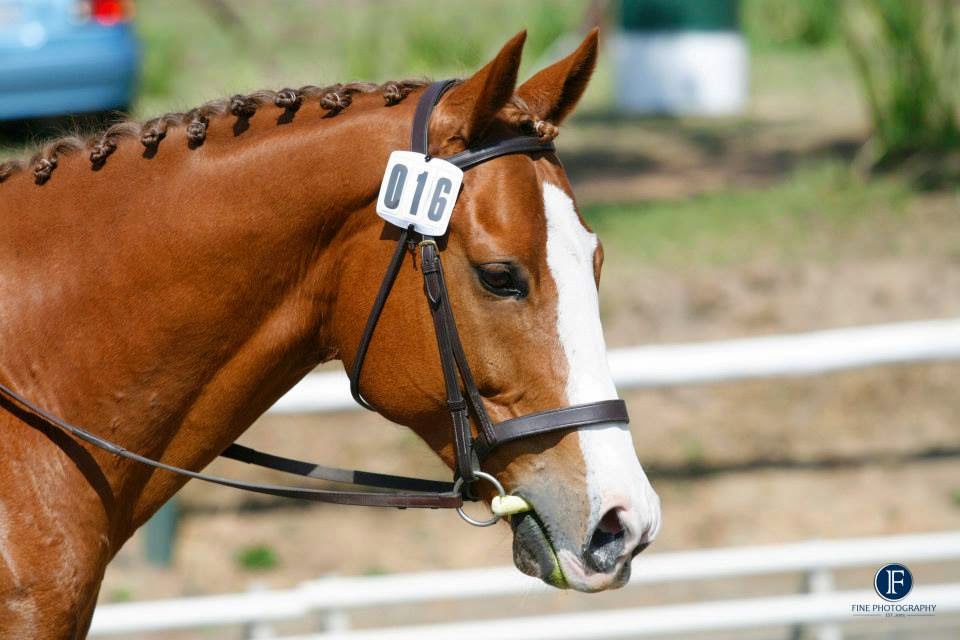 Msasa looks very much like his sire!
Beryl Shuttleworth, who has the Herbal Horse supplement range, also owns a son of Woodborough, called In Extreme. Born in 2005, this dark bay gelding was out of another Chief Warden mare, called Sweet Whisper, and was bred by Robyn Louw's father, Mike Louw. In Extreme was fairly useful on the racetrack, winning 4 races. He was by Gavin Smith in Port Elizabeth. The characteristic white blaze and white socks are still there, in spite of him being the same colour as his dam sire!
He has proven to be a match made in heaven for Beryl, and in her own words: "He is probably the most awesome horse I have ever owned. Never afraid of anything. From day one off the track he was doing outrides, etc. I adore him...."
She has recently started to do Le Trec with him, an equine sport which is fairly new to South Africa, but is slowly gaining momentum. The wide range of equine pursuits that Woodborough's progeny have done well in, are testament to his versatility as a sire. 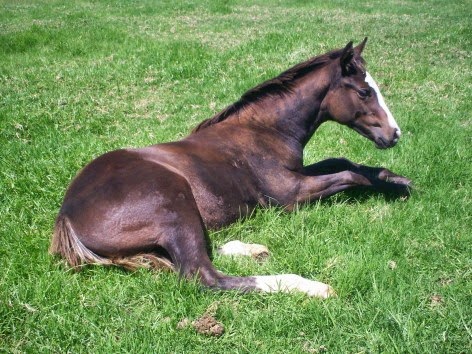 ﻿
﻿
In Extreme as a foal. Photo courtesy of Robyn Louw 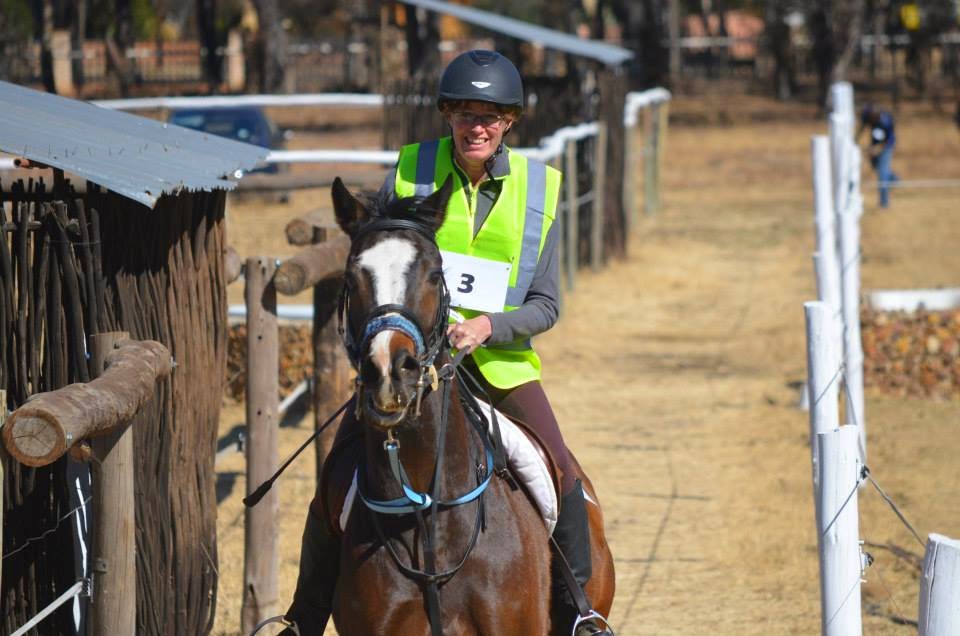 Beryl and In Extreme, aka Streamy, on a Le Trec course 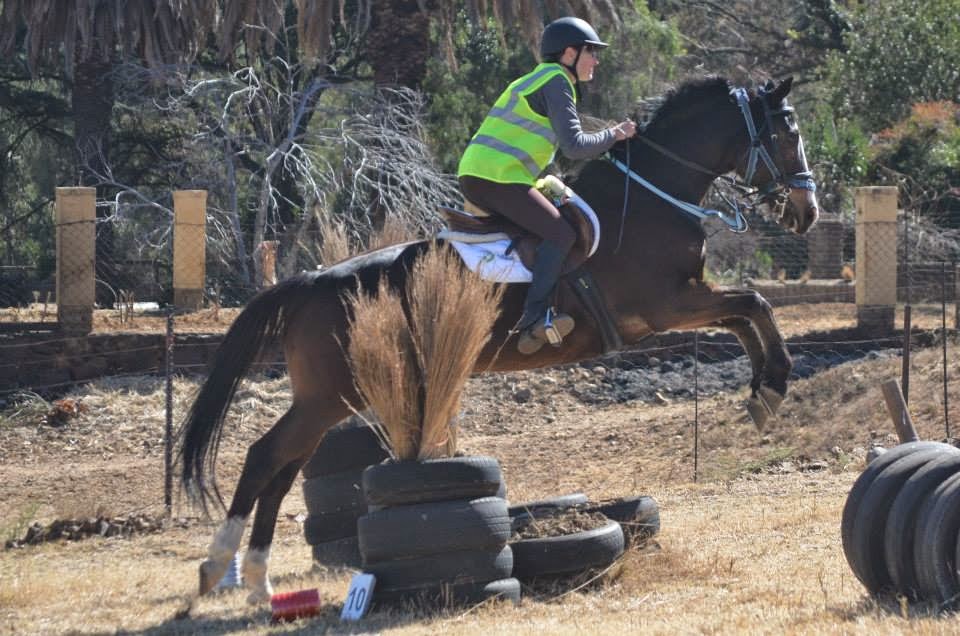 In Extreme taking a Le Trec obstacle in his stride 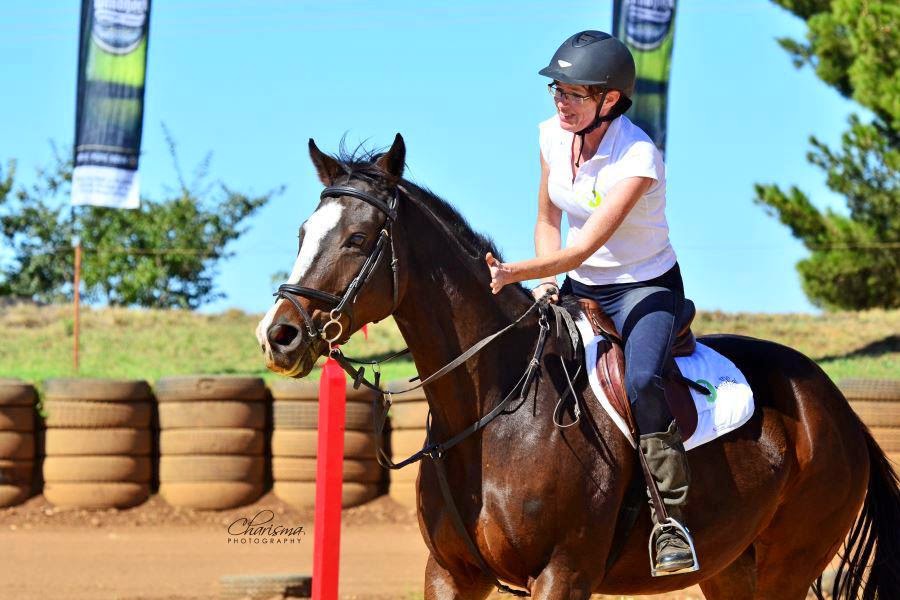 Beryl and In Extreme at a training show jumping show
Kim Wallace, fiancé of popular Kwazulu Natal racehorse trainer, Des Egdes, also had a son of Woodborough, Fields of Omaha. An eye catching light grey, Omaha, as he was affectionately known, excelled in the show jumping ring, jumping in the 1.10m classes. As a racehorse he was trained by Julie Dittmer and had 3 wins and 12 places over 4 seasons. His dam was Platinum Tours, who was by the Elliodor stallion, Model Man. ﻿ 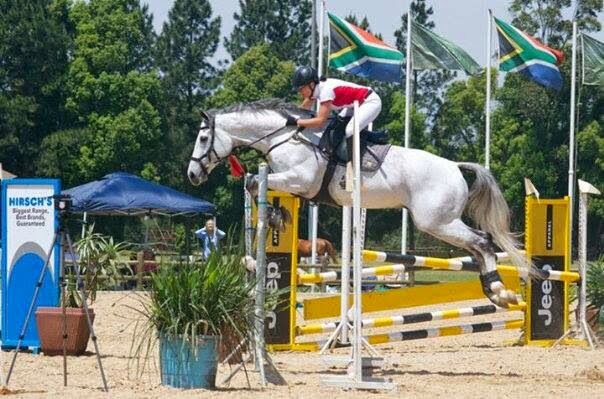 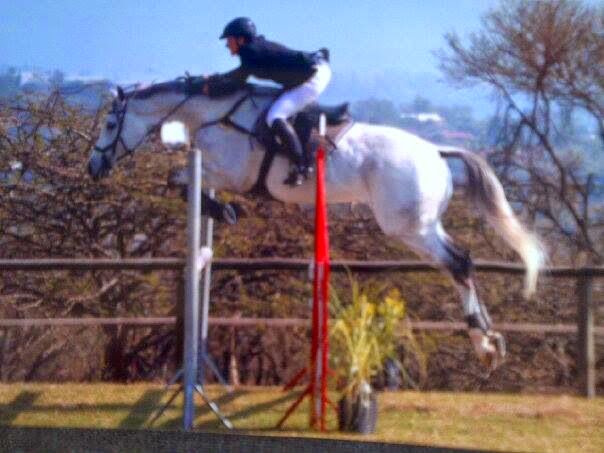 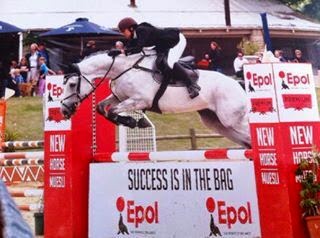 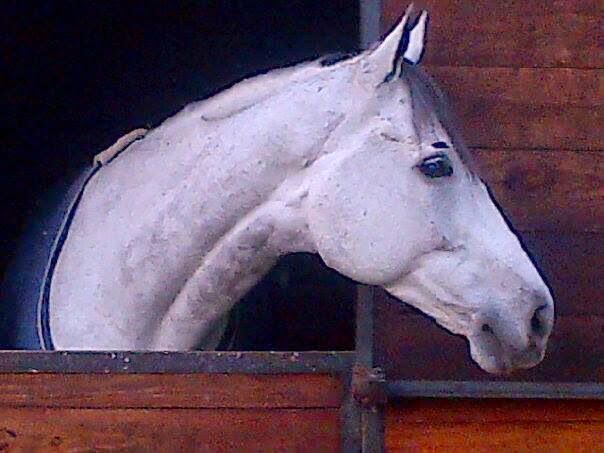 While they were not the same colour, Fields Of Omaha definitely
looks like his sire Woodborough
Thandolwami (which means "My Love" in isiZulu) is the best performed son of Woodborough on the South African racetracks. His dam is My Sweet Love, who is by Prontisimo(ARG). Trained by Craig Eudey, at the world renowned Summerveld Training Centre, near Durban, Thandolwami won 6 races and placed 20 times, amassing over R1 Million in stake money! Craig is still in contact with the new owner, and receives regular updates on Thandolwami's progress.
When he retired from racing he was originally ridden and brought on by top South African event rider, Heidi Klische Caine (Represented South Africa at WEG 2010 on Quantum Leap in Eventing), he is now ridden by Donne Allen. He is very bold and brave through the country, absolutely revelling in his new vocation! 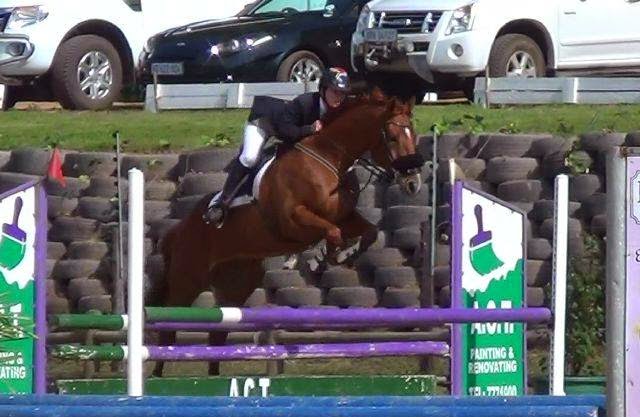 ﻿
﻿
Heidi and Thandolwami in the Show Jumping phase 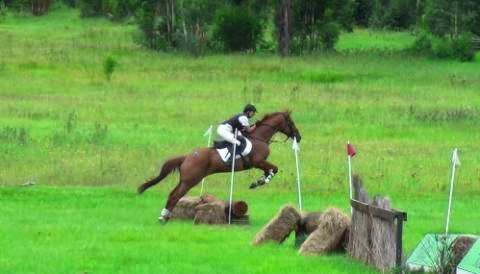 Heidi and Thandolwami flying through the country Thandolwami in the warm up arena 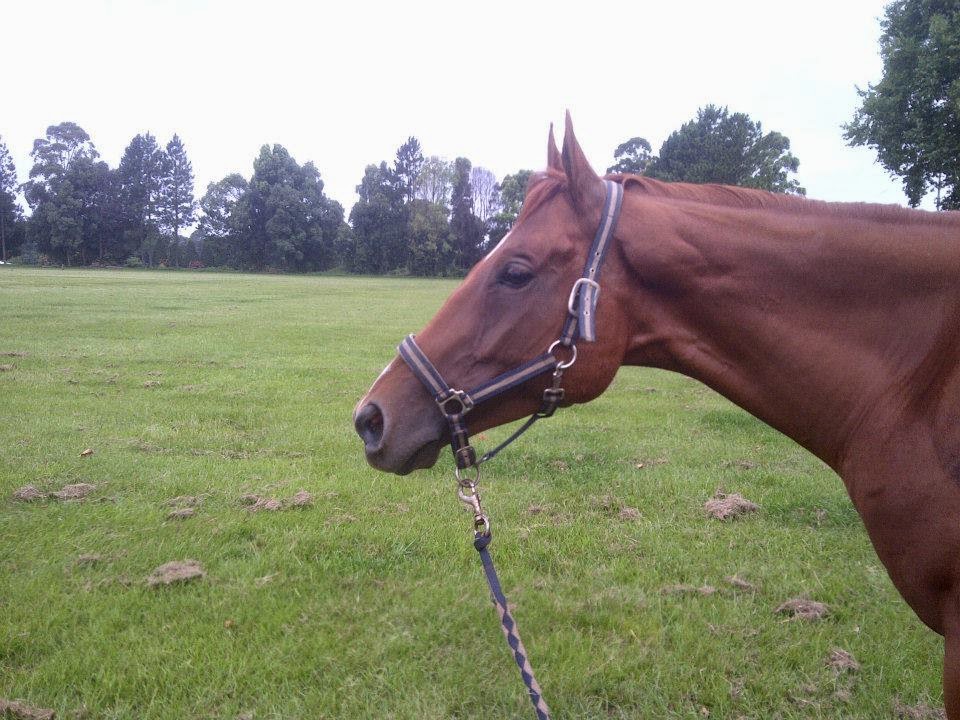 Just like his sire!
Woodborough progeny seem to be incredibly versatile, and in some cases are excelling in these pursuits barefoot. With only 213 lifetime foals, finding one of them may well be a hard task - the last few were born in 2011. But they are definitely worth looking out for!﻿
﻿
Posted by rubyclipper at 8:19 AM No comments: