CLARISSA'S STORY
Clarissa Groesbek started riding when she was 8 years old. As with so many others, she started on the riding school ponies, but she soon got her own pony, a little golden dun filly of mixed breeding. This 3 and half year old pony mare was called Mexican Rose, and with Clarissa being just 11 years old, they started their competitive careers together. 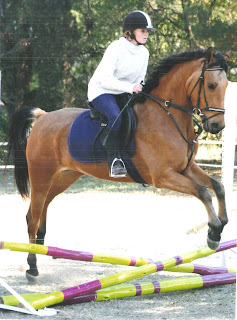 Clarissa And Mexican Rose, the early days.
﻿
﻿
The combination grew incredibly together, and they shot up to the 1.10m classes in no time, where they were very competitive. In 2011, however, the unthinkable happened, and Mexican Rose injured the deep digital flexor tendon in one of her hindlegs. The consulting vet actually recommended euthanasia, because the injury was so severe. But the tenacious young Clarissa would have none of that talk, and rehabilitated the mare to full competitiveness again, and they even upgraded to the 1.20m classes. But with Clarissa getting taller, and the tendon began showing some signs of further strain﻿, so the decision was made to retire Mexican Rose from competition immediately. 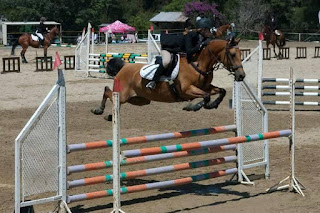 The incredible technique of Mexican Rose, who was
brought on by Clarissa from absolutely novice. 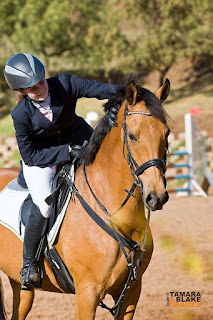 ﻿
The bond between them was immense!
And so the search was on for a new horse for Clarissa. By her own admission, a retired Thoroughbred racehorse was the last thing she was looking for, even though she had admired and idolized the great Thoroughbred Show Jumpers, like Ronnie Lawrences's High Hopes, and Gonda Betrix's Honey Girl, from a very young age. In her own words: "I never really thought much of a thoroughbred and cringed at the thought of owning another due to owning a very colicky and troublesome thoroughbred a few years back. Eventually we made the decision to retire him because despite all we did to help him, he was unable to be ridden due to continuous spells of illness and permanent lameness." That would most certainly put most people off from looking at OTTBs ever again.
But then in May 2015, she saw Necker Island... 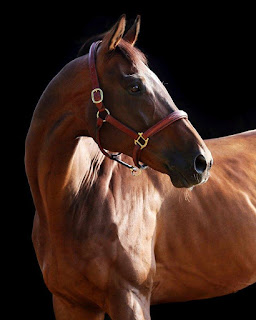 ﻿
Necker Island
Necker Island's Story and Background
Necker Island comes from one of the most successful South African female bloodlines, which is based at Ascot Stud in the Eastern Cape. The foundation mare of this particular line, was Totem Queen, a non-winning mare by Savonarola. As unremarkable as she was on the racetrack, the magic started when she was covered by Al Mufti for the first time. And again the second, third and forth times, and certainly with the handful of other stallions she was covered by. Her foals were all fair on the racetrack, and her best progeny was an Al Mufti filly called Indian Squaw, who won 4 races, including the Listed Ladies Day Handicap. I was lucky enough to work with her when I worked for trainer Tobie Spies in the mid 1990s. She win her very first start, shown in the picture, below. 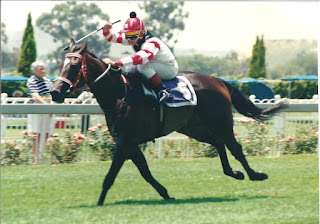 The very first Al Mufti daughter of Totem Queen, Samson's Queen has produced this exquisite colt by Sail From Seattle. He is owned by Green Street Bloodstock and trained by Snaith Racing, but is as yet, unraced. 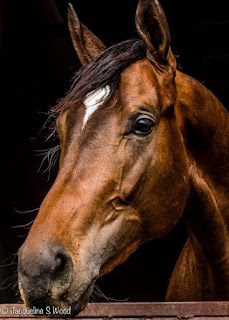 The Al Mufti influence is very strong in Last Outlaw
Little Indian, (once more by Al Mufti,and out of Totem Queen) produced one of the best racehorses we have seen in South Africa, Yorker (by Jet Master), a multiple Grade 1 winner, and now campaigning in the UK. 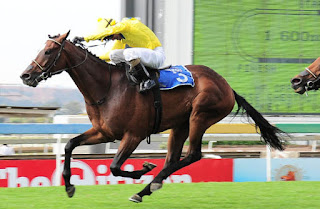 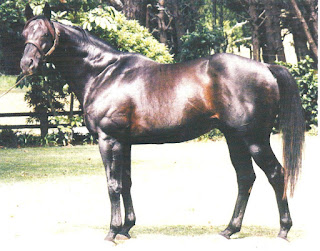 The very imposing Al Mufti, who stood
at Ascot Stud for his entire career

When Island Squaw was covered by Rich Man's Gold (USA), she produced a dark bay colt, in 2006. The Al Mufti influence was strong in this one too, as he took on his dam sire's dark colouring, instead of his own sire's rich liver chesnut colour. He went into training with Mike de Kock. He had just 3 starts in February 2010 where he showed very little talent to be a racehorse, finishing last or close to last in all 3 starts. 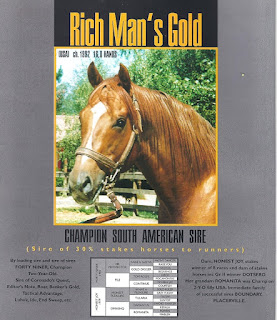 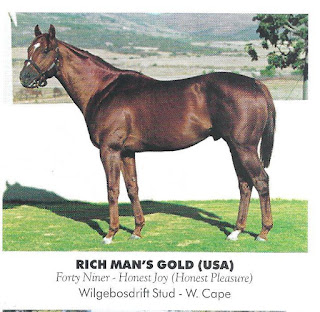 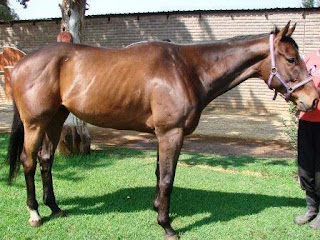 Necker Island as an awkward 3yo, recently retired from racing.
But while this little dark bay gelding was a rather unremarkable racehorse, he has shown remarkable talent in his new second career as a show jumper! Clarissa has admitted to not being entirely convinced that Thoroughbreds are very good Sport Horses, especially in the show jumping arena. But in the few months that she has ridden Necker Island, she has sais that she is an absolute OTTB convert and fan: "Since having purchased this boy (Necker Island) in May of last year, I have truly been blown away. Although quirky at times, the rate at which he learns is absolutely incredible and unlike any other breed (and I've ridden them all!). Once taught something, he retains it like a sponge and will execute it perfectly on asking the second time around. It took him all of 5 minutes to master leg yields at a canter; which has taken other horses months. In 10 months that I've had him, he just keeps giving of himself and no challenge is too big. He rises to every occasion and makes sure that his performance is always better than the last."
That is some testament to this young Thoroughbred, who has come on incredibly in the last 6 months or so. He had been competing in the 70/ 80cm classes with his previous owner, but they just never clicked, and he was troublesome and difficult in the show arena. When Clarissa got him, they cruised straight into the 1.00m classes with great ease and finesse. They upgraded fairly quickly, and are currently competing in the 1.10m classes. Clarissa's goal is to upgrade into the 1.20m classes by May 2016, and she intends to compete in the 1.20m Derby trial at the Galencia South African Derby.
Necker Island is showing some incredible technique over the fences, which is so typical of the celebrated Al Mufti progeny. With her background in producing young horses to top level, we have no doubt that Clarissa and Necker Island will reach the very top in the Show Jumping arena. We look forward to following their progress in the future! 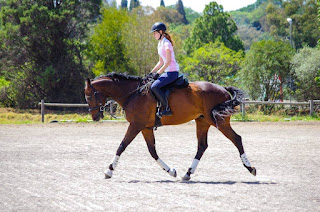 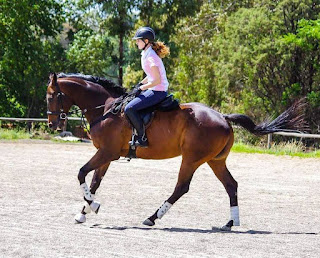 Is he really a Thoroughbred?? 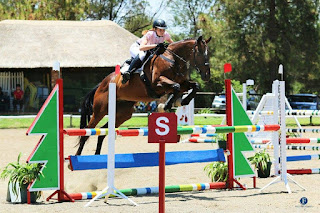 Showing superb scope and technique over the fences 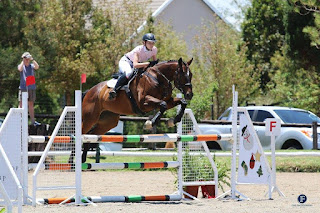 What a team Necker Island and Clarissa make! 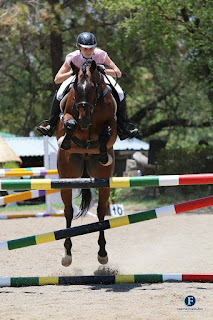